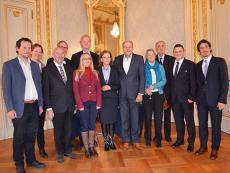 At the end of the plenary session of the Central Commission for the Navigation of the Rhine (CCNR), the Director of the Navigation Department at the Czech Republic’s Ministry of Transport, Ms Katarína Koleničková, the Director of Naval Affairs at Romania’s Ministry of Transport, Mr Viorel Olea, and the Secretary General of the CCNR, Mr Hans van der Werf, signed administrative arrangements on the mutual recognition of the boatman’s qualification obtained by attending a training course.

It was noted, by referring to the PLATINA tables of competences, that the competences acquired at training courses at the training school in Děčín (Czech Republic) and the CERONAV school (Romania) were equivalent to those acquired at recognised schools in CCNR member States, and these two pilot courses were approved. They confirm the pertinence of an approach based on the competences required in order to work as a boatman. The vital importance of practical experience is also emphasised, and the courses henceforth include at least 90 days of navigation time.

Thus from 1 December 2015 onwards, trainees successfully completing the course at the boatmen’s school in Děčín (Czech Republic) will be able to work on the Rhine in the capacity of boatmen. This recognition covers those professional training courses which began in September 2014 or later, or those which began between September 2009 and August 2014 included on condition that navigation time of at least 180 days has been completed. The Czech Republic already recognises training courses for Rhine boatmen on its navigable waterways.

From the same date, trainee boatmen at the CERONAV school (Romania) beginning their training in January 2015 or later who are more than 18 years old will be able to work as boatmen on the Rhine. Romania will adapt its regulations by 30 November 2015 at the latest to allow the recognition of training courses for Rhine boatmen on its navigable waterways. Recognition of these courses completes the process of mutual recognition of boatmaster’s certificates and service record books undertaken in recent years by the CCNR and seven States with observer status at the CCNR (Austria, Bulgaria, the Czech Republic, Hungary, Poland, Romania, and Slovakia), and helps to facilitate access to the labour market in inland navigation.

In this way, the CCNR and its partners confirm their commitment to ensuring a high level of safety for inland navigation, and an improvement in the attractiveness of jobs in inland navigation by ensuring greater visibility in terms of requirements. They confirm their determination to draw up standards in common with the European Commission, in cooperation with networks of experts such as EDINNA and the social partners.

This procedure is fully in keeping with achievement of the strategic objective of Vision 2018 “modernisation of training and qualifications for crew members”, and is a step towards implementation of the NAIADES II (2014-2020) programme, which is aimed at ensuring a sufficient, qualified labour force on the market pending broader harmonisation at the European level.